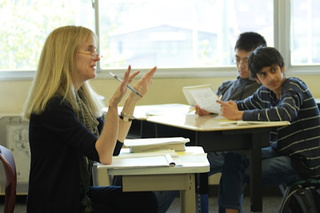 Sara teaching writing at The American School in Japan

Born Under an Assumed Name: Resources for American History Teachers

What do you make of the skating rink scene in the Holland?

What did being an American mean during the Cold War, according to the young Sara?

What do you think of Sara’s view of what it means to be an American? How did her views change over time, and why?

What were Sara’s views of people in other countries, and how did this change over time?

Why did the seven year-old, very young Sara think Americans were superior to other people?

How do you think overseas Americans think of themselves nowadays as compared to when Sara was living abroad?

Identify these three figures and their place in Sara’s life and in Cold War history: Mao, Ho, and Chiang.

In 1969, Sara become a “provo” to protest the Vietnam War. What should a person do if he or she disagrees with a country’s policy?

How did people in Taiwan, Holland, and Japan respond to Americans, and why?

What is Sara’s response to other countries’ views of U.S. actions in the Cold War? How did this change over time?

Based on the book, how would you describe life during the Cold War? How is it different from life now?

How might someone of a different political persuasion describe the Cold War events Sara recounts?

How would someone of a right wing political persuasion describe Communist activities differently from the way Sara’s father did?

How would Republicans, Democrats, or other groups think about the social programs Sara’s father admired in Holland?

What do you think shaped Sara’s father’s political views?

Do you think it was right for the U.S. to have the operation in Chigasaki?

Should the CIA support “third force” or other “pro-democracy” groups around the world? Think about pros and cons.

How do Sara’s feelings about her country parallel the evolution of U.S. foreign policy, or not?

Identify three events in Sara’s life and discuss how they were shaped by the Cold War.

When Nixon visited China, what did that mean about Sara’s father’s career?

What do you think about Sara’s view of soldiers?

What do you think of spies after reading the book?