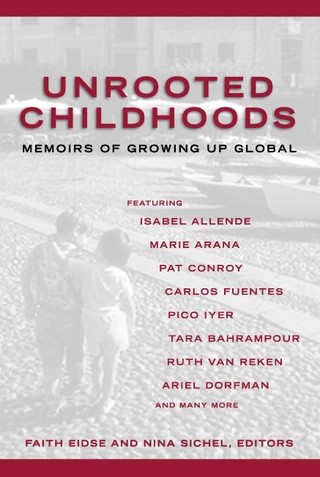 "A poignant chronicle of the disapora of the heart--and the heart's quest and longing for the universal place called home."
-Wall Street Journal
To obtain a copy of Unrooted Childhoods click here or support your favorite independent bookstore 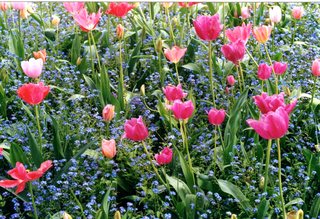 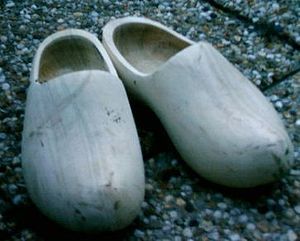 A collection of memoirs of deeply personal experiences from South America to Africa, Unrooted Childhoods presents a cultural mosaic of today's global citizens. In twenty stirring memoirs of childhoods spent packing, writings by the famous and the new...make universal the experience of growing up without the opportunity to ever "put down roots."

A blur of hand-shaking made up our first weeks of life in the yellow brick house, as we met other embassy families and Dutch dignitaries. Andy and I were installed in a school--a small, American school in the old heart of The Hague. There, for several days, I stood at the edge of the blacktop, pretending to be interested in my fingers and swallowing tears. Then, and many times thereafter, it seemed that my whole life has consisted just of this; standing at the edge of the blacktop, swallowing tears...


Klompen. Even the word was wonderful—the challenge of trying to say it right, with the n there but barely heard, and giving the o the right half-closed mouth sound. And the minute I saw a pair of grass- and mud-stained wooden shoes on the large feet of a farmer feeding his horse grain from a bucket, I loved them and wanted them. They were my parents' first purchase for me in Holland, and I spent my first year wearing them as often as possible. Even though I seldom saw anyone in the suburban streets wearing klompen, except for the occasional farmer buying a newspaper from a little shop or a farm boy who'd raced in on his bike to exchange some coins for some chocolates at the candy shop, they were the emblem of my attachment to, and identification with, my new country.

I once watched a klompen maker at work. Out of a block of wood set on a pedestal, he chiseled, with smooth, deft moves of his large hands, a shoe like something out of a fairy tale—a smooth wooden slipper that fit like a sock, with an up-turned elfin toe…

The Dutch shoe fit my parents and brother as well. My parents took to biking in the rain, wheels splattering their coattails as they pedaled. My father loved roaming Dutch villages, scanning for war monuments. My mother, for the first time, had found a language she could make her own, and with astonishing speed was translating Dutch for the embassy. And both of them took great glee in reading the latest naughty Dutch novels. And as for my brother, rain just added to the richness of his dirt-digging. He was meant for a mud wallow.

Holland filled up the romantic openness of my heart. I'd heard of Hans Brinker, of course, and of the boy with his finger in the dike, but it was more than that: the mossy-banked canals with the small boys and men in caps fishing from their banks; the dilapidated stone windmills thrumping away in the wind; the pannekoeken houses at the bends in winding country roads; the cows grazing in the flat, green fields and solid horses loping everywhere; the homely princesses, who lived only a few miles from me, riding :heir ponies in the queen's woods, where I also rode.

In the towns we visited, people sometimes wore old-fashioned costumes—bright, long skirts, and aprons, and up-curled lace bonnets. The Dutch children had blond hair and red cheeks that really were like apples, and the boys' legs were as chapped as their cheeks, as they wore short pants all through the winter. The mounted policemen who strolled the streets on their immense chestnuts seemed friendly despite their towering bulk. The dogs—everywhere—sat calmly by diners in restaurants. And no one seemed :o mind the dog-doo all over the sidewalks. At least one person on my walk outside managed to step in something. A certain dignity was wonderfully lost. A strolling queen and a muddy-faced boy were equal in the face of a Dutch sidewalk.

On wet days in Holland, there were the soggy green fields or lunched and hooded cyclists to look out upon. On bright ones, the tulips and hyacinth and daffodils were like scarlet and yellow and blue bedspreads on the ground. The tulips, sold everywhere n buckets for the price of a candy, seemed the perfect antidote to rain.

By the end of three months in The Hague, I could walk on stilts in my klompen. It was with great satisfaction that I used to demonstrate this to my parents' guests and to any child who might happen by. Even a lot of Dutch kids, I reckoned, probably couldn't do that. And this meant, in a kind of way, that I measured up, that I belonged.

When I put on my klompen that first month in Holland, I sprouted an attachment like that of cows to grass.

The March when I was plopped into The Hague American School, I found myself in Dutch class, never having read or spoken a Dutch word in my life, reading a book called Jan-Jaap en Zijn Beesten, a story about a girl and a boy and their turtle. The little Dutch family in the book, turtle and all, exactly matched my own. With some hard work, I was actually able to follow the guttural noises and grunts and thumps of the language, and loved to say such words as lopen, fietspad, and lekker, onomatopoeic words for "walk," "bike path," and "delicious." Then and there, in that narrow classroom, I fell in love with the earthiness of the Dutch language, and with all things Dutch.

Mine was split loyalty, however, and constantly tested. One night, on my way home from buying eggs for my mother at the candy shop, some neighborhood boys taunted me for being an American and tossed rocks at me. While running away, I jolted the eggs. At home, with a basket full of broken eggs, I wept to my mother about the mean boys, calling them "Dutchies," as I had heard other American children do. My mother patted me, in sympathy, while telling me never to use the term Dutchie again. She then loped off, herself, to buy another dozen eggs.

I sat stiffly on the couch during the time my mother was gone. While trying to focus on my book, I felt an acute, red-hot shame—a mixture of anger and chagrin that reflected my split response to being a foreigner in Holland. On the one hand, my chest burst with fierce pride in being an American—the unadulterated pride that only a grade-school child can have—and, in my arrogance, I wanted to sic some big American boys on my tormenters to show them whose country was the stronger. On the other hand, I hated not being able to understand what the Dutch boys had said to me and I would have liked to be on their side of the vacant lot—and that part of me wished ardently that I were Dutch…


Holland houses my image of what childhood should be: freedom, bikes, canals, and fields. It was the time in my life when nothing seemed hidden, when words and actions held nothing underneath. Puberty was an inconceivable world away, life was immediate and bright like Dutch coins, and home was a simple and sufficient thing: my dog, my family, a big, drafty house. I thought when I was nine and ten and eleven that this life would never end.

My life in Holland was one of pause and of grace, a five-year hammock suspended between the clamorings of earliest childhood and the urgencies and uncertainties of adolescence. Like life on shipboard, Holland was a time out of time, and yet a time packed with possibility. Every day there was the chance of a cream puff, a walk by the sea, or a pony around a corner.

The world I breathed in was a borrowed world, in a way. (For, unbeknownst to me, I would leave it far behind.) But most of all, my girlhood world was a Dutch world: a world where French fries are served with mayonnaise, where noses are red and damp, and where the best shoes are made of wood. Dutch hues and flavors came to constitute the sense of Home—both harborage and bunker—to which I would return forevermore.
A terrain of flat, green, sodden fields, pastures of cows and red "brick burgs. A land overhung by delicate, gray-white skies, aflutter with rising and falling flocks of pigeons. A town and a countryside continually rinsed by flashes of rain.

Here, under the shell-colored glow of rainlight, I pieced together a girlhood and breathed in the world around.

To read the whole of "Rainlight" click here, or support your favorite independent bookstore