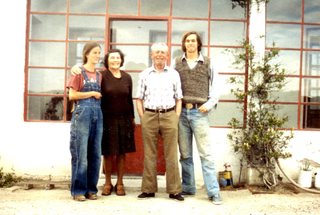 True Patagonian friends
For a copy of this essay, please contact: sara@sarataber.com

The Letter on the Cattlegate


ONE DAY RECENTLY, IN MY SMALL SUBURBAN HOUSE, I EXPERIENCED AN American brand of triumph. It was a smug, proud feeling. I had finally done it: I had become completely self-sufficient.

My husband was overseas at the time. I had gotten up at six; made my children's lunches; roused my daughter; gotten her off to school; awakened my son; sent him off to nursery school; worked at my rather frustrating editing job all morning; picked up my son; received a letter from my dying aunt and taken a moment to absorb her instructions to hug my children a lot; raced to the store for ham, milk, and bread; picked up my daughter; settled a squabble about who got to sit where on the couch—and on and on through dinner, stories, and bed. At the end of the day, as I put in the last load of laundry, it came to me that I had gone through the whole rushed roller coaster of a day without one whiff of human contact other than with my children. It hadn't even occurred to me to look for some. As I slid between the sheets of my neatly made bed that night, I thought, "I can do this totally alone and it's fine." I had achieved the American dream—I no longer needed anyone.

As a child I received a million messages—in a thousand forms—that the feeling I experienced that night was it: life's goal, life's bounty, adulthood's great achievement. There was Abe Lincoln alone in his cabin in the woods. There was that deepest of compliments, "He doesn't need anyone" (the one that always made me feel completely lacking). There were my schools, where I learned to choke down my tears and put on a brave face. "Buck up," people said. (I had just bucked up.) There was Thoreau when I was a teenager, and then the discovery of Freud in college—separation being the crowning psychological achievement. Through my 30s, the psychology of narcissism spread the maxim that to make psychological use of another was the cardinal sin. Finally, in the years surrounding 40, I've met a breed of invincible American mothers who seem positively macho in their capacity to smile at and single-handedly deflect any wrench thrown their way.

Neediness, in all of these paradigms, was grounds for deep shame. All of these messages indicated that once I'd become self-sufficient, once I'd achieved this American nirvana, I would be queen. But down in my basement laundry room that night, if I had let myself take a second look, I'd have recognized that the elation was hollow.

Ten years ago I lived in Argentina, deep in the desolate reaches of Patagonia. This was a vast region of scrub desert dotted with widely scattered sheep ranches. The only other people who lived there were the bachelor foremen and older couples who oversaw the 5,000 to 80,000 sheep kept on the ranches. When my husband and I drove from Puerto Madryn, the nearest town, through the monotonous, parched landscape toward our camp, we went for half an hour before spying a dwelling—an almost invisible concrete shack hunkered down low to the ground beside a metal windmill. After 20 minutes more, we came abreast a spruced-up red-roofed estancia—a collection of ranch buildings centered around a couple of houses and a huge stud barn. The next hour from there afforded the sighting of two more of the small, nondescript houses—way off in the sandy-tan distance. The funny thing is, my years in this remote, barely inhabited place were some of the most richly peopled of my life.

The days went like this: My husband and I rose in the morning to the blows of the glistening black right whales in the bay in front of our house. We ate stove-top charred toast and dulce de leche, the Argentine milk jam, and drank tea. My husband then climbed the cliffs behind our seaside hut for a day of whale spotting. I spent two or three days a week collecting the life histories of the peninsula's ranch families for a study of human isolation and the other days writing up my field notes. During these intellectually involving days, at any moment we might get a hankering for companionship and would drive for a half an hour or an hour to visit one of the ranch families we knew. There were no telephones for checking out the convenience of our visit; we just arrived.

Never, even once, did I feel our arrival to be unwelcome. The Patagonians met us with broad smiles on their wind-carved lips and fed us as much mutton, crackers, and potatoes as they could cram into us. Mainly, we talked and talked—about sheep, about child-rearing, about how to make the Argentine mutton stew puchero, about U.S. politics, about loneliness, about our crotchety trucks, about the sea lions that frolicked off our pebbled beach. The Patagonians needed us, and we needed them. Life—in this case, human life—was truly precious in that juiceless land, and mutual need kindled the connection between us and lit small fires within. Need brought us together. Without need, we all would have huddled like proud New England puritans in our isolated houses set in the bleak Patagonian expanse. Although our smugness might have grown fat, our larders would have been very lean.

Dona Sara, one of our ranch friends, would ask me over and over, "No necessitas nada, querida?" ("You don't need anything, sweetie?") Then she'd issue her whispered lament, "No se puede, che. No se puede." It was like the refrain of a beautiful song: "One just can't abide it all." Dona Sara was dying to give, to help. Because she'd felt—let herself know—the chill of loneliness.

I remember a day, after weeks of rain, when our truck was stuck in the mud near our house. My husband and I felt like shipwrecked sailors. We hadn't been to town for a month, and we were desperate not only for food but also for a little diversion, a little change. Finally, in a dramatic and desperate act, Peter scribbled a note describing our plight to Don Pepe, the manager of the ranch half an hour away; trudged up through the mud to the cattle gate above our camp; and attached the note to the fence. We knew that if Don Pepe rode by on his horse or in his red Chevy pickup during his sheep-watching patrols, he would spy the little out-of-place slip on the fence and respond.

Sure enough, within four hours the slight, gaunt 70-year-old man was standing on our doorstep, his rope-soled shoes like two mud boats. He'd read the hysteria in Peter's words and had immediately come to take us to his house for an asado—a mutton barbecue. Finally our bodies could unclasp. All afternoon and into the night we basked in the glow of the human fire in the Ferreros' bare, cold, spotless kitchen and talked about Jack London's tales. Need buoyed us. We laughed, we ate, we remembered the day forever…